The next modular to be lit on the High Street is Assembly Square. Unlike any other modular, this build does not have a 32x32 block footprint, but instead has a 48x32 footprint. It was released to celebrate 10 years of the modular building range, and designed to be a little bit special.

Assembly Square is composed of two separate units - a narrow 3 storey build on the left side, containing a cafe on the ground floor with a music shop above and a dance studio at the top of the build. The wider right hand unit is made up of a flower shop and bakers on the ground floor, a photography studio and dentist on the floor above and an apartment on the top floor.

Second floor: a LED strip in the dance studio and a BIT light in the apartment. 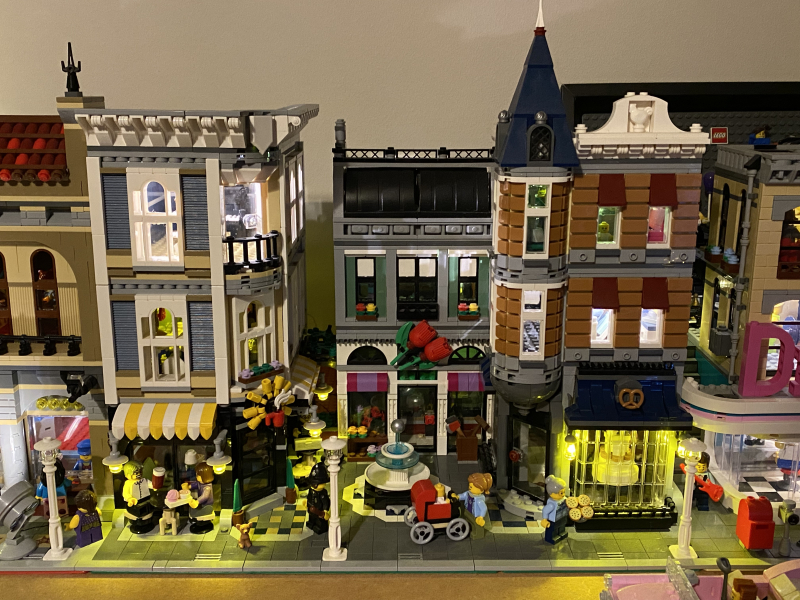 As with the previous modulars the idea was to create a 'lived in' look - too many bright lights would not have looked right IMO, and so the inside of the cafe, music shop, bakery, flower shop and photography studio used a single BIT light to avoid 'bleaching out' the scene. The dentist and dance studio made use of the LED strips as they would require bright, crisp lighting.

All items that were removed (tiles and plates) were stored at the rear of the modular to keep them safe.  Next up will be the Downtown Diner. Watch this space.